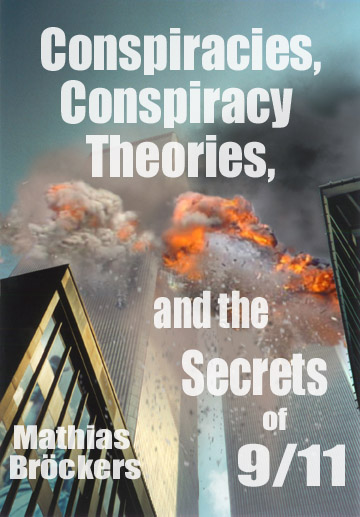 Conspiracies, Conspiracy Theories
and the Secrets of September 11.

When Pearl Harbor was attacked out of a blue sky on Dec. 7, 1941, America was utterly shocked by the perfidy of the Japanese. Today historians tell us that President Roosevelt not only had advance knowledge of the attack, he even consciously provoked it, because he wanted the US in World War II, while American public opinion before Pearl Harbor was 88% for staying out.
When the WTC and Pentagon were attacked out of a blue sky on Sept. 11, 2001, America and the world were appalled at the perfidy of the attack, and the evildoers and enemy were immediately made known: Osama bin Laden and his Islamic Al-Qaeda. George W. Bush declared a world war against "international terrorism", something which found little support beforehand.
Meanwhile, the evidence mounts that the US government was informed of the impending attack. Mathias Broeckers - science author, journalist and cultural editor for many years with "taz", Germany's alternative daily paper - felt misgivings from the outset about the mainstream media's chorus in unison on a single note. As if the media were all plugged into the same outlet, even the most reputable newspapers parrot the White House line on 9/11.

Seeking more data and more diversity of viewpoints, Broeckers took refuge in the Internet. There, with the help of a search engine, he made undreamt-of discoveries. He distilled them over the following months into a controversial documentary, which appeared in the on-line magazine "telepolis" and scored millions of hits. Greatly expanded in scope and depth, this work was brought out in book form by the German publishing house "2001."
Some of Broeckers' findings:
Sept. 11 is not only the date of a terrible mass murder, but also the crystallization point of bizarre inconsistencies, fantastical contradictions, discreet background moves and strategic secret operations. Has the world changed beyond recognition since Sept. 11? In fact, it had already changed before then.
A few examples: Grandfather Prescott Bush financed and supported Hitler, whom the US Army then helped to eliminate. As CIA boss and power behind Reagan's throne, Father George Bush armed Saddam Hussein. Once in office as president, he lured Saddam into the Gulf War. Son George W. Bush got the funds for his first oil company from the trustee of the same company whose scion Osama he now hunts: the Bin Laden Group. Florida governor Jeb Bush manipulated voting rolls to gain the crucial votes to swing the presidential election for his brother George W. Bush.
Osama bin Laden is a product of the US secret services, created for the terror campaign against the Soviet Union.
General Mahmud Ahmed, boss of the Pakistani secret service ISI, which cooperates closely with the CIA, had $100,000 transferred to the "terrorist pilot" Mohammed Atta in July 2001. From Sept. 4 to Sept. 15, 2001, he was on an official visit in the USA - for "discussions about the Taliban". On Sept. 11 he breakfasted on Capitol Hill with the chairmen of the Senate and House Intelligence committees.
Although the supreme command of the US Air Force was notified of the simultaneous hijacking of four jetliners, violating the most restricted "no-fly zones", it took 75 minutes before interceptors were scrambled - too late.
Why did George W. Bush act as if he had first learnt of the attacks during his visit to an elementary school? When it turned out later he had already been informed an hour before, then why was no meeting held to handle the crisis?
Broeckers is painstakingly thorough, and the inconsistencies in the official story are numerous:
Why was no data of radio traffic or of the flight recorders ever published?
Why was wreckage of the Pennsylvania crash strewn for miles over the landscape? Was it shot down after all?
Why did the USA's top bin Laden investigator, John O'Neill, resign 8 weeks before the attack, in July 2001?
What direct business links exist between the Bush and bin Laden families?
What interests does vice-president Cheney's Halliburton company have in the trans-Afghan pipeline project?
Why were secret negotiations held in 2001 with the Taliban regime about building this pipeline?
Why were FBI investigations of suspicious flying students stopped by higher-ups in Washington?
Why did Bush and Cheney pressure opposition leader Daschle to prevent a thorough investigation of Sept. 11 by the US Congress?
Broeckers is an investigative conspiracy expert. With this book, he shows that the generally accepted official version of Sept. 11 is itself a well-thought out conspiracy theory, which points the blame to false leads. "Despite the biggest dragnet in history ", as Broeckers sums it up, "as much evidence has surfaced against the alleged chief planner Osama bin Laden and his Al-Qaeda gang, as in the first hours after the attacks: practically none."
Broeckers asks who the actual beneficiaries of the terrorist attacks are, and this question brings other notorious suspects into play. He does this not in order to encourage paranoia, but for the constructive gains we need from an objective scientific discipline in the field of conspiracy. "Without appropriate conspiracy theories, our highly complex and conspiracy-laden world can no longer be properly understood."
Mathias Broeckers "Conspiracy, Conspiracy Theories and the Secrets of September 11." Includes an interview with the ex-undersecretary of state in the German Defense Ministry, Andreas von Buelow, and a lively discussion of the important role of conspiratorial behavior in nature and history. All of Broeckers' sources, and the complete table of contents are available online at www.zweitausendeins.de.